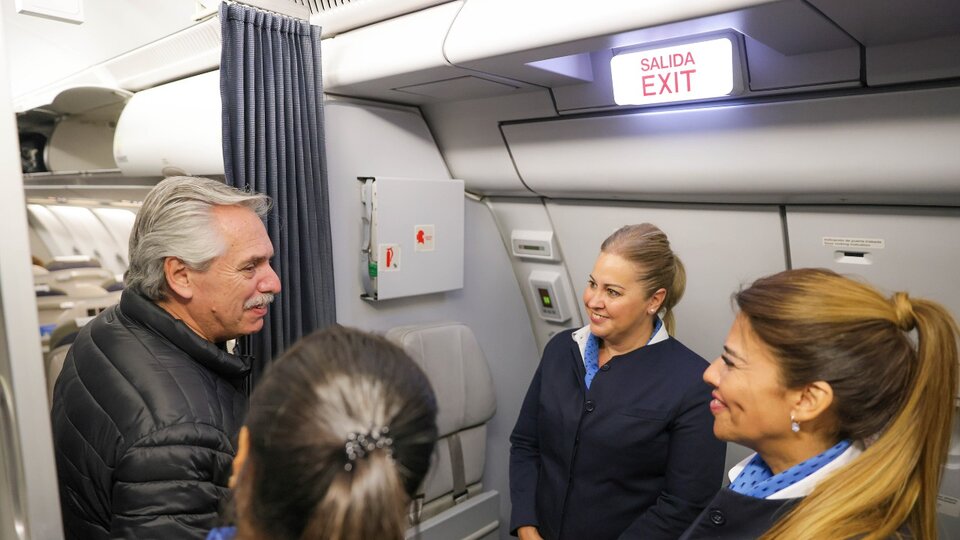 After 8:00 p.m., the President Alberto Fernandez He arrived by helicopter at the military zone of Ezeiza International Airport, boarded a private plane of Aerolineas Argentinas and embarked on a new tour that would take him to France and Indonesia. The head of state leaves the country amid an atmosphere of domestic debate over the Frente de Todos and, ahead of the vice president’s speech, Cristina Fernandez de Kirchner, will be presented on November 17, Terrorism Day. Fernandez will return to Argentina later that day, although he is expected to do so in the evening and will not be able to take part in any of the events. News of possible candidacies for 2023 was not ruled out during the act, a year after the president announced in the Plaza de Mayo that he wants Peronist candidates to be elected “in a big step”. This is an idea that Kirchnerism rejects.

The biggest challenge of the week-long trip, according to sources close to the president, will be, among other things, “calling for peace and addressing the consequences of the Russian invasion of Ukraine. A renewed and supportive multilateralism”. The tour will also include important bilateral meetings, including a meeting with the French President. Emmanuel Macronand one with China, Xi Jinping.

Fernández boarded the plane on Wednesday night after a hectic day: in the morning he chaired a cabinet meeting at the Casa Rosada, where he told his ministers about the objectives of the tour. He stayed there for about 15 minutes and then went to his office. Before leaving, the President signed Three Commandments: Rise in prepaid medical services emerges, Payment in two installments of Destitute Bond Y Extension of Regular Sessions of Congress (See separate notes). The last point is the result of an agreement with Economy Minister Sergio Massa so that parliament can tackle the extraordinary income plan. Fernández attended a presentation of a new comprehensive educational digital information system for schools and had lunch with the Spanish government’s Minister for Equality, Irene Montero.

See also  A new anonymous email at the IDB condemns more affairs and points to who is responsible for Claver-Caron's displacement.

An Aerolinas plane took off with part of the entourage accompanying Fernández during the trip: the First Lady, Fabiola Yanez, the General Secretaries of the President, Julio Vitobello; Communication and Press, Gabriela Cerutti and Marcela Losardo, Ambassador of Argentina to UNESCO.

The president will arrive in Paris at 10 a.m. (Argentine time). He will meet Foreign Minister Santiago Cafiero; With Secretary of International Economic Relations Cecilia Todesca Bocco and Ambassador to the United States George Argello. He will hold a bilateral meeting with Macron at 1:45pm (always Argentina time). It is estimated to last until 2:30 p.m., when he will participate in the launch of the Child Protection Lab of the Alliance for Protecting Children’s Rights in the Digital Environment.

On Friday, November 11, the 104th anniversary of 1918 will be held and at 12 noon President Macron will be on the panel “Globalism Challenged by the War in the Ukraine.” Meanwhile, at 2:00 p.m., there will be an important event for the region: it will be a meeting in Venezuela with the participation of the presidents of France and Colombia, Gustavo Pedro. Finally, Macron will host a dinner party. The French specifically invited Fernández to participate in the Fifth Forum for Peace because of his role as interim president of CELAC. On Saturday, the Argentine President will meet Paris Mayor Anne Hidalgo

This time at the G-20 summit in the island paradise of Bali in Southeast Asia, Fernandes and entourage will share three intense days with 19 of the world’s most important leaders. He will be joined there by Sergio Massa and vice president Juan Manuel Olmos.

See also  Hunchbacks, clawed toes and double eyelids: this is what humans will look like in the year 3000.

The theme of the gathering will be “Recovering Together, Rebounding Stronger” to mark the moment the world is transitioning after the Covid-19 pandemic. Achieving the objective proposed by the summit will be very challenging, as the recovery after the economic and health crisis shows no signs of convergence, but instead, structural inequalities are increasing. . That, among others, would be one of the proposals the President would take. One of the specific demands, for example, is to request more credit opportunities for countries like Argentina, in addition to pandemics and war.

Travel back to Mexico

On his return home, on November 17, the President must quickly pack his bags. On November 24, he promised to meet his friend, Mexican President Andrés Manuel López Obrador, to discuss economic cooperation between the two countries. The call to unify the two sides came after Lula da Silva’s victory in Brazil, and it has not been ruled out that the Brazilian is in the game.