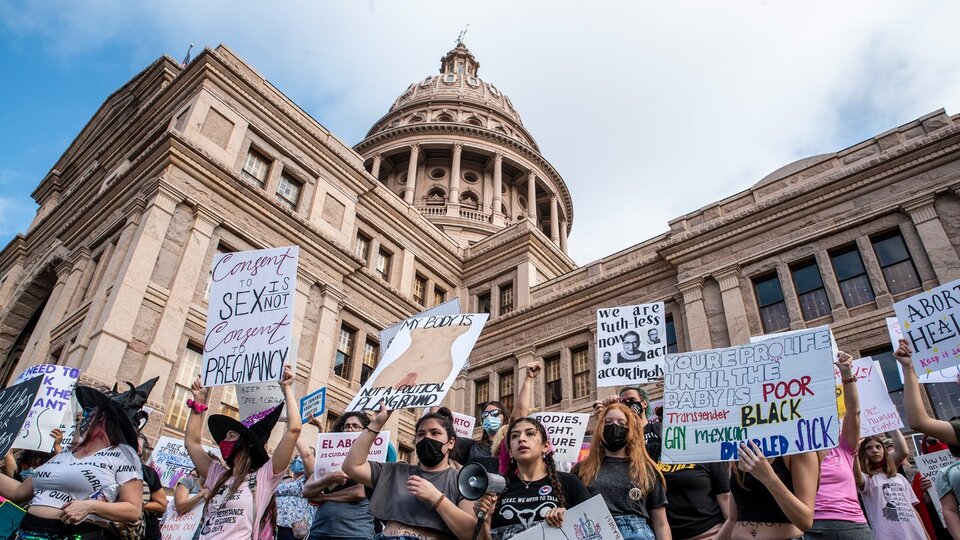 The Federal Court of Appeals in the United States re-established the abortion ban law that went into effect Friday night in Texas., Just Two days later a judge suspended it.

An appellate court allowed the re-establishment of this ideal conservative state As soon as the fetal heartbeat is detected, most women are unaware that they are still pregnant, six weeks after conception. The law does not make an exception in the case of rape or sexual assault.

The Family Planning Organization announced that the Planned Parenthood Organization would immediately suspend abortions for more than six weeks and condemned the court ruling that “once again ignores the half-century precedents that protect the constitutional right to abortion.”

The “Texas Heartbeat Act”, which went into effect on Sept. 1, was suspended Wednesday by a federal judge in Texas following a complaint from the Joe Biden government.

After the siege, abortions for more than six weeks were resumed at some clinics in the state, the second most populous country in the world with a population of 29 million.

But the Texas Attorney General, Republican Ken Paxton, appealed to federal court, which is known to be one of the most conservative in the country, ruling in his favor and banning the automatic termination of pregnancy again.

Whatever the final decision of the Court of Appeal, the case will end again before the Supreme Court, which refused to read the law a few weeks ago, although prosecutors acknowledged that it had raised serious doubts about its constitution.

Magistrate Robert Pitman, who blocked the law Wednesday, said Texas “has created a serious and unprecedented mechanism to deprive its citizens of a significant and well-established constitutional right.”

According to Bitman, the law “prohibits women from taking control of their lives” and his court “will not allow this attack to continue for another day.”

What the law says

Texas law Allows individuals to file civil lawsuits against anyone who assists a pregnant woman who has had an abortion If you believe you are violating the ban, you will be rewarded up to $ 10,000 per plaintiff if you win the case.

That organization has so far allowed Texas officials to escape responsibility for law enforcement because the enforcement burden rests on those private citizens and not on the conservative leaders who have been forced into veto.

This legal vacuum allowed the law to come into force with the approval of the Supreme Court a month agoAlthough this is in stark contrast to the 1973 court decision legalizing abortion across the United States, known as “Row Versus Wade.”

Texas veto prohibits abortion from six weeks pregnant, while many women still do not know they are pregnant

In all likelihood, the federal government will appeal against the decision of the Court of Appeal. You have to do this until Tuesday afternoon. The law will soon be raised for consideration by the Supreme Court.

In the 1973 Synopsis, Roe V. Wade, the High Court guaranteed the woman’s right to abortion. He then noted that fertilization was impossible, i.e. it would apply at 22 weeks of pregnancy.

In recent years, a dozen other conservative states have enacted laws comparable to Texas, but have been pushed to court for violating this law.

“The Supreme Court must intervene and stop this madness,” Nancy North, head of the Center for Reproductive Rights, which protects the right to abortion, responded in a statement.

But in September, for the first time in nearly half a century, the Supreme Court refused to prevent Texas law from coming into force. Wade.

The High Court justified its inaction with “new practical questions” on the grounds that Texas law has a tool: it exclusively entrusts citizens to take action against organizations or individuals who help women or incite them to file a complaint. To perform abortion illegally.

The Supreme Court’s position in this case is seen as a “right-wing reversal” of this higher jurisdiction, with six of the nine judges being conservatives, including three appointed by Donald Trump.

The Supreme Court is considering a Mississippi law banning abortion after 15 weeks of pregnancy and could take advantage of the opportunity to establish its new status.

If the court overturns Row’s judgment. Wade, all states are free to prohibit or allow abortion.