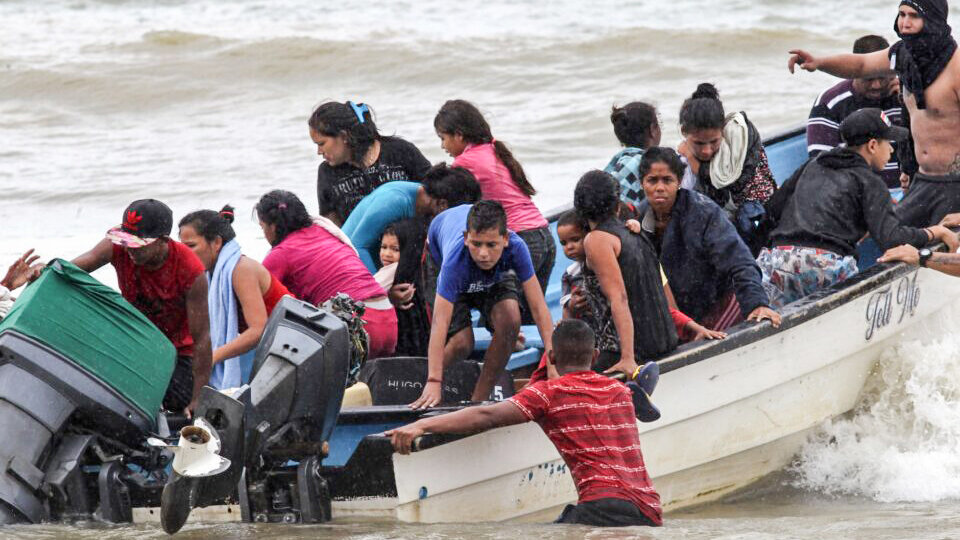 In which an adult child died Trinidad and Tobago Coast Guard arms his mother with guns fired to intercept a boat It consisted of illegal immigrants from Venezuela. Human rights activists denounce that other children and adults traveled on the dangerous boat. The boat departed from Delta AmagoA poor state with a majority tribal population, Immigrants who travel daily between six and ten boats are estimated to be getting out of the crisis.

What does the official version say?

The incident happened around midnight on Saturday when Trinidadian agents were on board TTS Scarborough warship A ship was found crossing the border between Trinidad and Tobago and Venezuela. When it was finally stopped “it was discovered Illegal immigrants were hidden on the ship“.

“An adult illegal immigrant was found to have a child and it indicates bleeding.“, Adds the cool text of the Trinidadian Coast Guard. The woman, identified as Dary Elvis Eliagnis Sarabia, was stabilized and transferred to a local health center, but “Unfortunately the child did not respond”. Accredited by the Coast Guard In the statement Although they did not claim responsibility for the baby’s death, they “shot the engine of the boat”. Already Elvis Santoyo.

According to the official version, the boat that wanted to reach the island collided with the patrol boat on several occasions and, “Because the crew feared for their lives,” he said, firing the engines “in self-defense.” To stop it. “All available methods, including the megaphone, the ship’s horn, Churchlight and flares, tried to stop the suspicious ship, but the ship continued to try to escape,” they said.

Condolences from the government

Prime Minister of Trinidad and Tobago, Keith RowleyHe expressed his condolences to Venezuela on Monday The unfortunate loss of a child during a safety measure“However, he immediately added in a press release on his official Facebook page:” We continue to appeal to our Venezuelan neighbors. Do not risk your life and the lives of others in illegal and dangerous border gods“.

According to Rowley, after speaking with Venezuelan Vice President Delcy Rodriguez, Trinidadian Ambassador Edmund Dillon promised to expedite the process of issuing credentials so that he can meet with top officials of the Coast Guard as soon as possible. Of his country. The Venezuelan government, which has good relations with Trinidad and Tobago, has not yet commented on the matter.

Human Rights Activist and Coordinator of Venezuelan Penal Council Active Defenders; Orlando MorenoThe NGO reported the situation to the Office of the High Commissioner for Human Rights in Venezuela. “It simply came to our notice then They shoot the engines of the boats to stop themIn this case The protocol went out of hand“Moreno said.

“Relatives of the murdered boy tell me that His parents are shocked and look for another woman who was on the boat. I will be detained, they guess. There were other children and adults on the trip who had no information so far, ”the Venezuelan activist explained.

The Trinidad and Tobago Coast Guard, a former senator and humanitarian lawyer, said its officers acted “in self-defense” after a speedboat collided with their boat. Nafisa Mohammed He described the incident as “dangerous” and called for a “full-scale investigation.”

Mohammed, who asked the Venezuelan embassy to be involved in the incident, argued that law enforcement officers should be properly trained. “We are talking about trying to collide with a new Coast Guard ship, which is a large ship at sea. Come on man, let’s be true. Please tell the truth in this matterHe told a local newspaper Defender.

Secret departures since 2018 have killed at least a hundred people and gone missing, The result of a dangerous voyage on dangerous and overweight boats crossing the 120-kilometer sea route that separates the two countries. The United Nations estimates More than five million Venezuelans have emigrated since 2015 And that About 25,000 people live in Trinidad and Tobago.

The Caribbean has tightened its deportation policy to prevent people from entering the country illegallyPoints out that its citizens are being “attacked” by illegal immigrants who “use innocent children for their own purposes.”

In April last year, a boat capsized in Boga de SerbianteA narrow body of water that is difficult to navigate when attempting to complete the route to Trinidad and Tobago, with initial balance Three were killed and 17 were missing. Since then, there have been a number of shipwrecks, and locals have condemned the disappearance of boats heading for the islands.