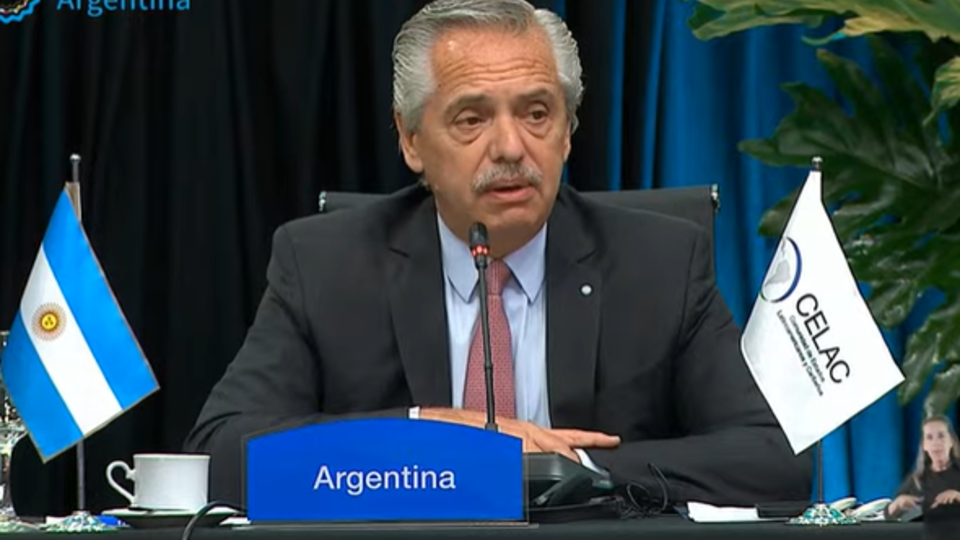 Cioli: “The agreements between Argentina and Brazil are an interesting reference for Celac”

Argentina’s ambassador to Brazil, Daniel Cioli, today assessed the “political decision” of Argentine Alberto Fernandez and Brazilian President Luiz Inacio Lula da Silva to “strengthen Mercosur” and the agreements reached between the two leaders. An “interesting note” is the countries participating in the VII Summit of the Community of Latin American and Caribbean States (CELAC) in Buenos Aires.

“There is a strong commitment from Lula and Alberto Fernández to strengthen Mercosur. Agreements were signed based on production complementarity, energy, finance and cultural integration. This is an interesting reference that should be used by each of the countries that are members of CELAC,” Scioli FM said in reports to Futurock.

In this regard, the diplomatic representative mentioned the agreements signed by the two heads of state after the bilateral meeting held at the Casa Rosada as a preview of the CELAC Summit at the Sheraton Hotel.

How the summit proceeds: Plenary session and “family photo” behind closed doors

After Alberto Fernández’s speech, the closing ceremony of the Celac leaders began behind closed doors. After that, the traditional “family photo” will be held, and then the summit delegates will be treated to a courtesy lunch at the Sheraton Hotel.

Then there will be a second debating session between the leaders, which will be one of the central axes to decide which country will succeed Argentina under Celac’s leadership. So far, Saint Vincent and the Grenadines (a country located in the southern Caribbean and north of Venezuela) is the only legitimate candidate to have occupied the Forum’s PPT in its inaugural year.

At the end of the afternoon’s closing remarks, Foreign Minister Santiago Cafiero is expected to give a press conference together with the foreign minister of the country entering the PPT (if there is consensus) to report on the results reached at the summit. , as usual, will be embedded in the final document.

Why did Maduro cancel the Celac summit?

After days of rumours, The government of Venezuelan President Nicolas Maduro announced Monday Canceling your trip to Argentina To participate in the Summit of the Community of Latin American and Caribbean States (Celiac) when it was made public, he denounced preparations for an attack against his delegation. “In the last few hours we have been informed beyond doubt A project drawn up within the neo-fascist right“The aim is to carry out a series of attacks against our group led by the president,” the Venezuelan executive said in a statement.

“They want to put on a bad show To undermine the positive outcomes of such an important regional event”, the Seventh SELAG Summit, “thus contributing A smear campaign -already failed- it was carried out From the North American Empire against our country“.

The President of Cuba, Miguel Díaz-Canel, considered this Tuesday the “urgent need” to strengthen the Community of Latin American and Caribbean States (SELAC), whose VII Summit began in Buenos Aires.

In a message posted on his official account on the social network Twitter, Díaz-Canel considered that “strengthening this diverse and inclusive mechanism is an urgent need and a shared obligation to achieve the unity of #OurAmerica.”

“Essential Latin American and Caribbean integration unites us and convenes the VII Summit of #CELAC in Argentina,” he added in the release.

The VII CELAC summit will be held in Buenos Aires this Tuesday, with representatives from 33 member states, including Brazil, rejoining the mechanism after leaving in 2020 under the administration of Jair Bolsonaro.

Representatives of the member states of the Community of Latin American and Caribbean States (SELAC) this Tuesday, at the beginning of the VII Summit of the organization, with unanimous applause for the return of Brazil, the then Brazilian President Jair Bolsonaro withdrew the country from the Forum in 2020.

“Undoubtedly, Celac without Brazil is a very empty Celac, whose presence fills us today,” Argentine President Alberto Fernandez said at the opening of the VII Celac Summit, which is being held at the Sheraton Hotel. Buenos Aires.

One of the highlights of the summit, which will bring together representatives from 33 Latin American and Caribbean countries, is the return to Celac at the hands of Brazilian President Luiz Inacio Lula da Silva.

President Alberto Fernández affirmed that “we are the only ones of little value” and added that “the time has come to create a region that protects the same interests for the advancement of our people.”

The President called for “respect for diversity” among CELAC countries

Alberto Fernández called for “respect for diversity” and, in his opening speech at the VII SELEC summit, assured that “the region has a great opportunity to advance in integration”.

“In a difficult year, Argentina led the region’s singing voice in the world”

President Alberto Fernández celebrated Brazil’s return to the regional camp, highlighting today that “Argentina led the region of the world in a difficult year” during the exercise of the pro-temporary presidency of the Community of Latin American and Caribbean States (CELAC). By delivering the opening address at the VII Summit of this space in Buenos Aires.

“Democracy is at risk”

Alberto Fernández warned of the rise of the extreme right in different parts of the world and especially in the region and asked “not to allow the institutionalization of our people to be endangered”.

Along these lines, he called for strengthening “institutionalism and democracy in the face of a denial and fascist right”.

Alberto Fernandez: “We live in the most unequal continent in the world”

The president opened the Celac summit in Buenos Aires with a number of Argentine administrations headed by the pro tempore presidency of the regional bloc.

presence of China and the United States

US President Joe Biden has sent US special presidential adviser Christopher Todd to Buenos Aires to represent him at a regional meeting convened by Alberto Fernandez.

Argentina has invited both President Biden and Chinese President Xi Jinping to attend the summit, proposing Celac as a “multilateral” environment for global dialogue.

As for Xi, the President of the People’s Republic of China will address a few words to the entire meeting of heads of state via a videotaped message.

Lacalle Pou was the first to reach the summit of Celac

Foreign Minister Santiago Cafiero welcomed the delegations of the various delegations participating in the CELAC Heads of State Summit from 9.10 am.

It was in a room at the Sheraton Hotel in Buenos Aires, decorated with an Argentine flag and a Chelac, and the president of the San Martin Palace was escorted by two grenadiers.

The first president to arrive at 9:20 was the Uruguayan Luis Lacal Pov. Twenty minutes later, Cuban President Miguel Díaz Canal did so, and at 9:55 a.m., Alberto Fernández did so.

The forum’s opening ceremony will take place at 10 a.m. and will be presided over by Argentine President Alberto Fernandez as head of the regional mechanism. This will lead to a presentation by Foreign Minister Santiago Cafiro, who will review the work carried out by Argentina’s Pro Tempore Presidency (PPT) throughout 2022.

After these presentations, which will be open to the press, a plenary session of the heads of state will take place behind closed doors, followed by the traditional “family photo”, followed by an honors lunch at the Sheraton Hotel. For delegations to participate in the summit.

Then there will be a second debating session between the leaders, which will be one of the central axes to decide which country will succeed Argentina under Celac’s leadership. So far, Saint Vincent and the Grenadines (a country located in the southern Caribbean and north of Venezuela) is the only legitimate candidate to have occupied the Forum’s PPT in its inaugural year.

See also  Rosario Murillo and the aesthetics of power in Nicaragua

At the end of the plenary session in the afternoon, Cafiero is expected to give a press conference with the foreign minister of the country entering the PPT (if there is a consensus) to report the results reached at the summit, the definitions, as usual, reflected in the final document.

San Martín street and del Libertador avenue, Retiro neighborhood, Córdoba, Madero and Alem streets will have some traffic reduction, which will vary throughout the day according to the activity of the Federal Police. Security of the opening of the VII Summit of Heads of State of the Community of Latin American and Caribbean States (SELAC).

According to sources from the Buenos Aires Ministry of Transportation, the agency’s workers will maintain the total cut between San Martín Street and Del Libertador Avenue.

In turn, Eduardo Madero and Leandro N. There will be a partial cut on Córdoba Avenue between Alem; Between this last road and Córdoba there will be a total cut to the north.

Lula, the protagonist of the summit

The main fact of the SELAC summit in Buenos Aires was the return to SELAC in the presence of Brazilian President Luiz Inacio Lula da Silva. The South American giant was temporarily excluded from the regional bloc in 2019 by the decision of his predecessor, far-right Jair Bolsonaro.

One of the issues that will mark the meeting is the impact of the events in Brazil a week after Lula’s inauguration, when thousands of Bolsonaro supporters invaded and destroyed the headquarters of three state authorities: the Planaldo Palace (Government of Gaza), the Congress and the Federal Supreme Court (STF).

Those who are not in Buenos Aires

The scheduled presence of Venezuelan President Nicolás Maduro, who finally announced that his country will be represented by Foreign Minister Juan Gil Pinto. Maduro canceled his trip after denouncing plans by the “neo-fascist right” to attack the Venezuelan delegation and cover up the multilateral meeting.

Peruvian Dina Boluarte will not attend amid the severe crisis and protests her country is going through, but the Peruvian constitution mandates that the president’s exit requires congressional approval.