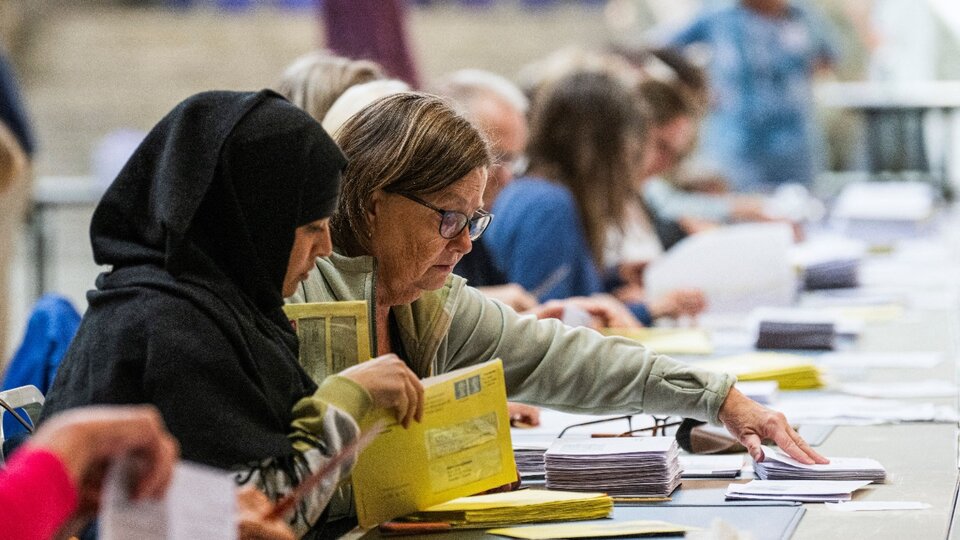 Swedish Prime Minister Magdalena Andersson, a social democrat, announced her resignation this Wednesday after confirming the defeat of a center-left coalition against the right-wing opposition in Sunday’s legislative elections.

With 99.7 percent of electoral districts counted, the right-wing opposition won by three seats, 176 to 173, according to the Election Commission’s tally on Wednesday, which includes external votes and early votes cast by the deadline. But they didn’t arrive on time.

At the end of the last day of vote counting after Sunday’s close election, outgoing Prime Minister Magdalena Andersen of the Social Democratic Party conceded the defeat of her constituency and announced her resignation, effective this Thursday.

The Social Democrats, who won the most votes in the last century, defended their first place, gaining 30.4 percent, two points more than in 2018. In second place is the far-right Sweden Democratic Party (SD), with 20.6 percent. Opposition leader Ulf Kristerson’s Conservatives fell by seven-tenths to 19.1.

“Almost all the votes have been counted, but the result of the preliminary election is clear enough,” Anderson told a news conference. The outgoing Prime Minister expressed concern over the rise of SD, predicting that it would be a tough and complex assembly because of the slim margin.

“This worries many Swedes. I see that unease and I share it“, the prime minister, who insisted on fighting hatred and intolerance, called on the other three forces of the right to put limits on the SD. The Social Democratic leader insisted that his party had a decisive election result and it was clear. The largest in Sweden.

The final result compared the opposition bloc with 49.6 percent of the vote, the center-left with 49 votes and a difference between the blocs of between one and three places compared to Monday’s result.When “Wednesday’s votes” were still uncounted.

Just 44,500 votes separated the two constituencies on Monday. These days there has been caution while waiting for a final decision, although the four parties of the right-wing camp have held meetings and Swedish media are already speculating that portfolios will be handed out. “Wednesday votes” have historically had little impact on the final outcome, except in 1979, when they secured a right-wing victory after 8,500 votes separated the two constituencies on election night.

The SD became a major winner in the elections, not only as the most developed force, but also as the force that wrested the leadership of the right-wing camp from the conservatives, which it had held since 1979. It will have a direct influence on the formation of the government after a decade of isolation.

This far-right organization has historically been subjected to a “garden sanitarium” by other forces since it entered parliament in 2010, which explains why the Social Democrats have ruled in the minority in the last two legislatures. The room where the majority was right wing.

Finally, an agreement with the centrists and liberals is necessary, breaking the center-right alliance that has existed since 2004 and isolating it, although the conservatives, Christian Democrats and liberals, have switched sides again and are fighting for a long time. Far right though not in government.

See also  A cross between Marcos Galperin and a journalist from a Barcelona newspaper: "Is it your thing to fight on Twitter from an iPhone?"

Swedish media have speculated that the conservatives and Christian Democrats will form a minority executive, led by Christensen and supported by other forces in the group with outside support. However, the SD demanded an important role and wanted to be part of the government, its leader Jimmy Akesson said on election night.

The threat of ownership was fulfilled

The change is historic, as never before has a Swedish government backed itself into governing with the SD, which won 20.6 percent of the vote in this election nomination and won the title of the country’s newly minted second party. “Now work starts to make Sweden good again,” its leader since 2005 Jimmy Akesson responded on his social networks, promising to be a creative and proactive force.

The leader of the right-wing party was grateful for the votes and for defining the election campaign brilliantly. In addition, he also promised that SD will become the second largest party in the country. “Enough is enough of the failed social democratic policy that has led the country down the wrong path for eight years. Now is the time to rebuild security, well-being and unity. Time to put Sweden first. The Sweden Democratic Party will be a constructive and driving force in this work.He expressed right-wing views on his social networks. “A process begins to define in detail how a winning team will be constructed, and this is a process that takes as long as it takes to create a new long-term stable board”he added.

Nationally described as conservative, anti-immigration (particularly anti-Islam), Eurosceptic and far-right, the SD was founded in 1988. The party normalized itself in the Swedish political landscape and increased its representation until it entered parliament in 2010. With 5.7 Percentage of votes. From there the votes increased in every election.

But even if the SD is the first party of the right-wing majority, its leader will not be able to win the support of the other organizations and become prime minister, which Ulf Kristerson has been assured. “Thank you for the trust. Now we will order in Sweden!” Christerson, the leader of the Conservative Party, was quick to respond on his networks.