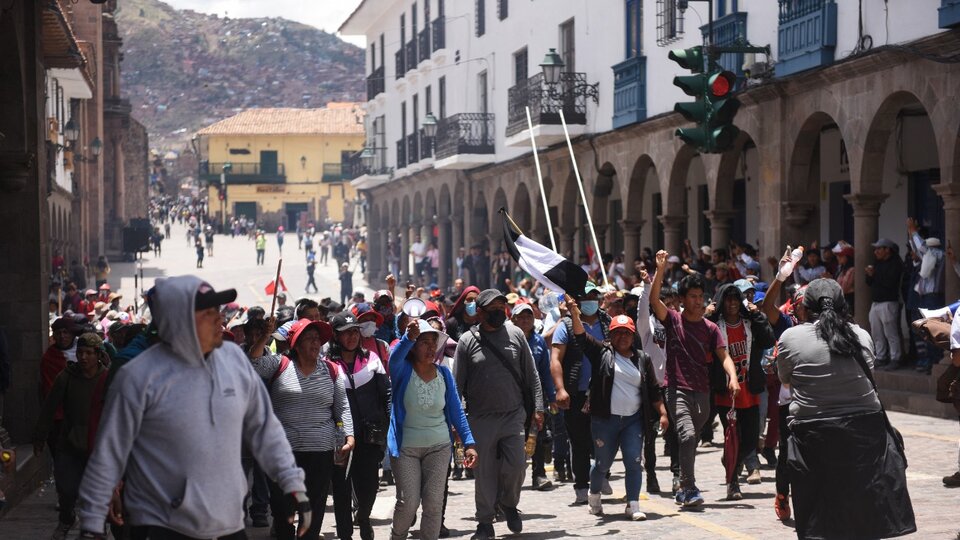 Deaths from repression in Peru do not stop. The information was given on Wednesday night Death of an Agrarian Chief In the Andean region Cuzco Shot in the chest during anti-government protests. This Thursday it was confirmed in JuliacaA highland city in the Puno region south of Cusco, Death of one of the injured during the crackdown The bullets on Monday that moved this city and country. About A 15-year-old boyShot in the head. The death toll in Juliaca rises to 18, all from gunfire. With these deaths, 48 people died, 47 residents and one policeman, protests began in December after Congress ousted former President Pedro Castillo. Of the 47 civilians killed, 41 were killed in police and army firing. More than 600 people were injured. Figures of horror.

In Congress, the creation of a commission of inquiry into the deaths during the protests this Thursday was approved by 71 votes in favor, 45 votes against, with one abstention. Fujimori and other far-right legislators objected. Center-right and right-wing legislators who support the government supported the creation of the inquiry committee, given the level of evidence of the crackdown on protesters. The parliamentary inquiry is in addition to an investigation launched by the prosecutor’s office two days ago.

This Thursday Mass mobilizations continuedMainly concentrated in this South AndeanWhere There is an indefinite strike. Demonstrations against the government and Congress took place in Cuzco, Juliaca, Dagna, Abanque, Apurimac, Arequipa, Lima and elsewhere. In the Cusco province of Espinar, protesters entered the Antapaccay company’s mining camp and set fire to two vehicles. 80 road blockades were reported in 25 regions of the country, mainly covering 10 regions in the south. Mobilized farming communities play an important role in these struggles. The Andean South is militarized. The Puno area has a curfew from 8:00 p.m. to 4:00 a.m.

At the time of closing this noteA mobilization began in the center of Lima With the same demands as the protests that paralyzed the south of the country: Resignation of President Dina Boluarte, acquittals of deaths caused by repression, shutdown of right-wing majority Congress and elections progress For this year. Due to public pressure, the elections have been postponed from 2026 to April 2024, but there has been a demand for the elections to be held this year. A Constituent Assembly is also needed Change the constitution from the dictatorship of Alberto Fujimori and the release of Castillo.

A large banner reads “Que Say Wayan Dodos. Prison for murderers. Chants called Boluarte a “murderer”. Students, trade unions, social organizations, left-wing parties joined this mobilization, which at the time of sending this note, when it started, was huge. Police cordoned off the Plaza de Armas, where the government palace is located, to prevent protesters from entering. He was also banned from attending Congress. Residents of Puno, Cusco and other Andean regions announced they would travel to Lima in the coming days to join rallies in the capital. The government is still keeping them out with threats of repression.

While the massive rally began in Lima, in Cusco, police and residents clashed near the airport. The area was covered with tear gas. Shots were heard. The villagers retaliated by pelting stones at the police. Cusco airport, the country’s main tourist hub, was closed. On Wednesday, one person was killed and over fifty injured in a clash between police and protesters at the same location. Remo Candia, a 50-year-old peasant leader, was shot in the chest while part of a mass protest in Cusco. He was helped by his companions and rushed to hospital where he underwent emergency surgery but died during the night. The police attacked the demonstrators as they made their way to the airport. Officials point out that the intention was to take over the airport to justify the police action. The clash lasted for several hours. In addition to the death of the Gandia chief, the remaining 55 were injured, 16 of them by gunfire. Two of the injured are in critical condition. 6 policemen were injured as they were attacked with stones and other objects.

Severe police repression At the same time against protesters in the city of Cusco, tens of thousands took to the streets in the nearby city of Juliaca to pay tribute to the 17 people killed on Monday – which has now risen to 18. Defense forces. They carried coffins with the dead to cries of “murderers” and “justice”. They carried Peruvian flags, Waibala and black flags. Tributes were paid to those who died of repression in the city’s main square, which was packed with people. Many of the dead were taken to their towns, from where they came to Juliaca to join the protests. Four injured residents of Juliaca were transferred to Lima, all with projectile impacts, presumably metal fragments, to the head, three in the eye area and one with a fractured skull.

While paying huge tributes to their dead, the people of Puno agreed to continue the protests and regional strike. “We can’t rest when they never treat us as citizens, when they stigmatize us (financed by terrorists and drug traffickers, accusations the government and the right make against protesters). We’re going to Lima. Whatever happens, the strike continues,” said transporter Aurelio Medina. . Businessman Cornelio Candori assured that the consensus was to demand Polwart’s resignation: “Here we stand firm, we will not abandon the indefinite strike until Tina Polwart resigns. They killed it, it won’t be like this. After so many deaths, there is no way to talk”.

The Assembly of Regional Governments, which brings together the governors of the country’s 25 regions, demanded an investigation into the deaths during the protests and the punishment of those responsible. They demanded that general elections should be held this year. The governors of Puno, Cusco and Aburimac have called on the president to resign. The National Coordinator for Human Rights, in a statement titled “Stop the Massacres”, asserts that the Boluarte government has shown “total contempt for life” and that the president and his ministers must accept “their politics and punishment”. Massacre.”

After the meeting of the Council of Ministers this Thursday, the head of the Cabinet, Alberto Otorola, reiterated that the President will not resign. He said he regretted the death but returned to defending security forces and criminalizing protesters. With more than forty residents and a police officer dead, Oderola wanted to justify the crackdown, saying the police were attacked and were defending themselves. The government continues to bet on repression as its trump card. But the crackdown, which has resulted in more than forty deaths and more than half a thousand injuries, has so far fueled popular anger and protests rather than intimidated protesters.