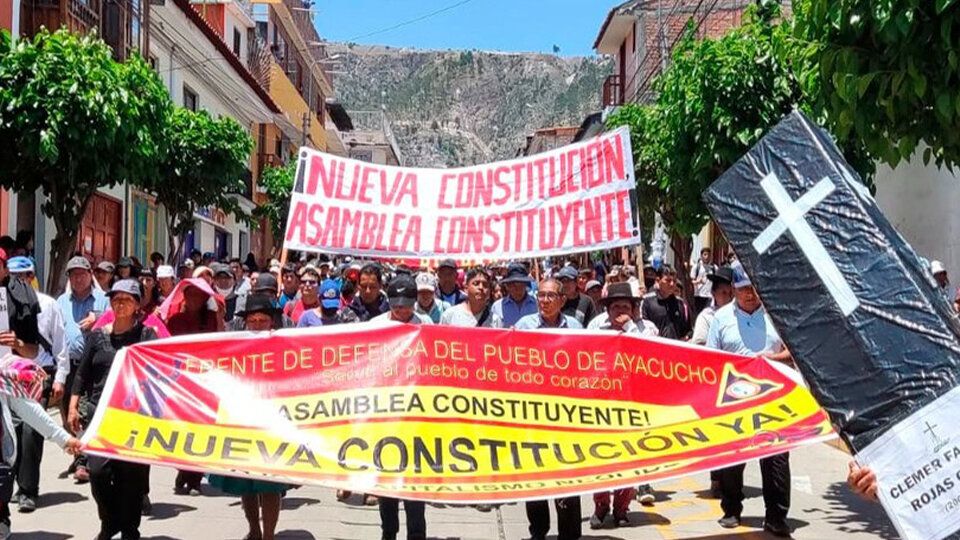 Peru calls for justice. Forty six people They were killed in a month-long struggle. They started when he took charge In Boluarte Last December 7th, now nobody knows when they will end. They occur specifically South of the countryThe Andean, remarkably native, is in every way remote from Lima, where the central power resides in its viceroyalty. Eighteen of the 46 deaths occurred this week: they occurred in the city JuliaIn the Puno areaNeighboring Bolivia, with an Aymara majority, has seen the largest carnage since the start of the crisis.

The mobilization was called by the Ayacucho People’s Defense Front, which unites various trade unions. “There are agricultural workers, street vendors, teachers, students, shopkeepers and activists, citizens,” explains Estefania Alanya, vice-president of the front, as a column of women with hats, skirts and aguayos with megaphones, young people, relatives of the victims, banners with demands: Closure of Congress, resignation of Tina Polwart, independence for Pedro Castillo, Constituent Assembly.

Alanya described recent threats: “Since the leaders have come out to give statements asking for justice for relatives who have been killed or injured, they have received threatening calls, the leader of the front has been summoned before the prosecutor’s office, and any overflow of a threatening situation if practiced will be condemned or terrorized or disrupted. What is happening in Ayacucho is the protests. Also happening elsewhere, are charges of terrorism – known in Peru as “terruquios” – and arrests.

Peru seems to have broken away. Two times, two countries, two realities. On the one hand, protests, indefinite strikes, coffins in the streets, cries in Quechua, blocked highways, seized airports, tear gas, 5.56-caliber military bullets, a state of emergency, militarized cities. A country that calls for a national re-foundation, a new social contract to end a new social contract drawn up under the dictatorship of Alberto Fujimori in 1993, seems exhausted.

On the other hand, a centralized power in Lima clings to the defense of a contested order that does not recognize the mobilized nation. “What are the protests for, what are they asking for (…) What you are asking is an excuse to continue creating chaos,” Polwart said on Monday after learning of the first of 18 deaths in Juliaca. That same night, Prime Minister Alberto Otterola described the demonstrators as “criminals”, denied their claims and justified the crackdown.

Otorola was the defense minister when the 28 deaths occurred in December. This Tuesday he was approved as prime minister by the National Congress in what was called a “vote of confidence” in the Polwart cabinet. This approval revealed the alliance between the president and the majority of forces of the right during the year and five months of the government of Pedro Castillo: three times more precisely, on the last December 7, it actually happened. Castillo dissolved Congress and ordered another assembly of powers three hours earlier.

See also  Sensation in the United States: A dozen passengers were raped on a train

Castillo is now in pretrial detention for 18 months. In Ayacucho, many like Regina Tinojo, “Resident, Teacher,” will march this Wednesday through Huamanga, asking for their release, and participating in the Dec. 15 massacre that claimed the lives of 10 Ayacucho residents. Like many others, so much death in the region is tragic: 40% of the nearly 70,000 deaths left by the internal conflict between the Sendero Luminoso, the military, paramilitary groups and self-defense groups, took place here between 1980 and 1999. .

As with Ayacucho, several organizations from the regions plan to mobilize in Lima. “Mr. Otorola indicated in his speech to the nation that the provinces are not going to be allowed to enter the capital, so it is necessary to organize ourselves better because there may be arrests, obstacles to enter the capital. The people of Ayacucho want to go en masse,” Alanya explains. Similar reports are coming from other provinces, such as Puno and Cuzco, which want to go to Lima to protest.

Mobilization of regions to the center of political power is part of the uncertain grouping. The government seems to be betting that time, attrition, death and criminalization will have a mobilizing effect. It’s not just about the executive, but about those who appear to be in charge of Peru: the right-wing majorities in Congress, the judiciary, the armed forces and the police have gained more weight with the crisis. It seems that everyone is ready to stay in their places even as the death toll rises by the week.

Faced with this situation, there are growing voices of opinion that the way out is for Polwart to resign. If that happens, Congress must also have a board of directors change, with an obligation to call elections for a maximum of nine months. That would be an election release closer to the date approved by Congress in the first instance of April 2024, which is far off in this scenario. Will a new vote solve the crisis that reaches the foundations of the Peruvian political system? The year and a half since Castillo’s shipwreck had made one thing clear: Lima’s elite were unwilling to allow an outsider to endanger the status quo.

Boluarte, without a bench or party of his own, must also consider his own circumstances at this time. He and Otorola are part of a public ministry investigation for “genocide, justifiable homicide and grievous bodily harm” for the deaths resulting from the crackdown in December and January. Arrival of Inter-American Court of Human Rights The breakthrough could reveal new elements to shed light on what happened in the massacre at one of the country’s biggest crises, no one knows how or when it will end.