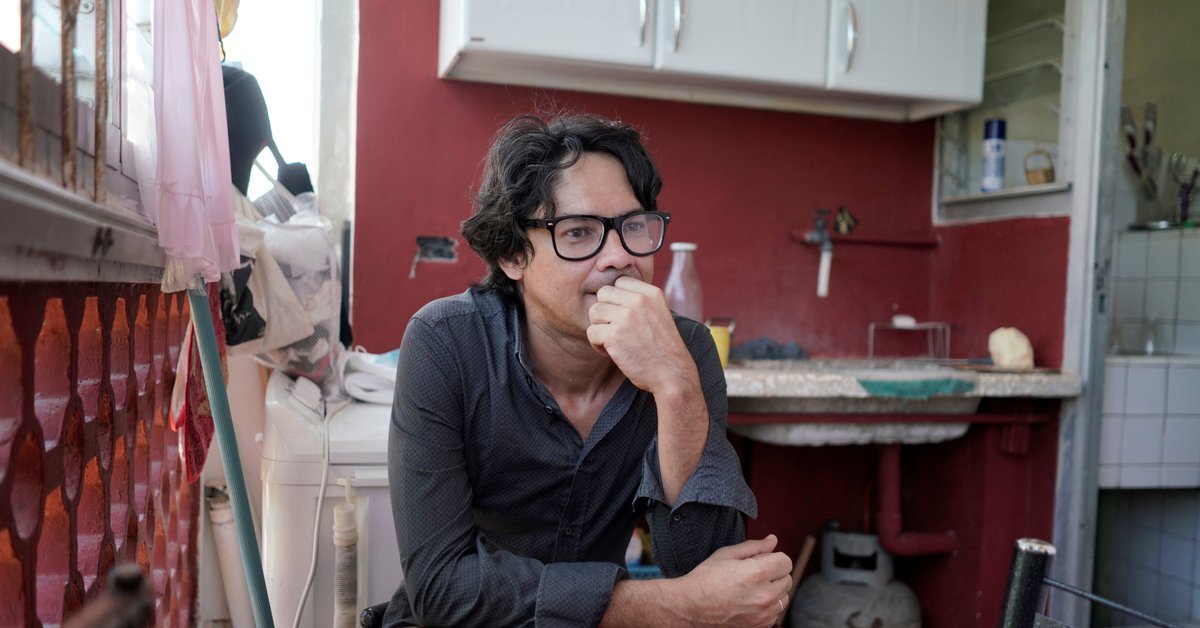 Jr. Garcia Aguilera, founder of the archipelago movement and one of the promoters of the 15N protests (REUTERS / Alexandre Meneghini)

Cuban artist Jr. Garcia AguileraOne of the promoters of the November 15 protest in Cuba confirmed this Wednesday that he was in Spain with his wife. “Alive, healthy and intact with ideas.”

On her social networks, Garcia Aguilera, 39, thanked all her friends for their concern. “Many who made this journey possible.”

“I have been without communication for several days. I need to update myself on the situation of the other members of the archipelago. Tell Odyssey very soon. A hug!”Wrote the Cuban dissident leader.

The Cuban playwright is in Spain He was unable to implement a plan to stage a protest on the streets of Havana last weekend. After security forces besieged his house.

In an interview with renowned and award-winning Cuban director and filmmaker Ian Patron on his YouTube channel, The activist gave some details about his trip to Spain, saying that his plan was not to seek political asylum but to return to the island. In addition, he announced that he would be counting all the events that took place this Thursday.

“The regime knows how to do things and it isolates you. They manage to push you out of their center, out of the mindset that allows you to make the right decisions. Their goal is to destroy you as a personGarcia said.

The playwright said that the strategy of the Cuban dictatorship was to silence dissent and eliminate individuals. He admitted that on November 15 the dictatorship cut off all communications from his home, isolated him and brought in people to intimidate him, failing and destroying him.

He also knows that the dictatorship came to Spain as a victory. “I think they brought out their whiskey bottles to celebrate the exit, but they just got the horror they created.”.

Garcia says this year’s events, such as the massive parade on July 11 and the mass imprisonment of activists, have removed the regime’s mask from the world.

“I believe there is no honest or clear person who does not think there is a tyrannical dictatorship in Cuba.“, He said.

Among the reasons for his trip to Spain, he said, was that he was completely isolated on the island so he could speak and say everything he thought about the Cuban dictatorship. I said in that interview that I am not violent, only the word is my weapon.

Government sources have informed the news agencies Europa Press And EFE Garcia, founder of the archipelago movement, He landed in Madrid after applying for a tourist visa.

“This is his personal decision. You have applied for the visa and it has been issued to you. Obviously, the Cuban authorities did not object, otherwise they would not have come out. He currently has a normal visa. We do not know if he wants to seek asylum., Sources in the Spanish Foreign Ministry told the Spanish newspaper today Country.

The same sources did not want to reveal his whereabouts, but they confirmed that he had arrived at Madrid’s Barajas Airport, and they did not rule out that he was still in the Spanish capital.

From Sunday, The Cuban dictatorship made a major move with paramilitary groups to block the building where Junior Garcia and his family live in Havana. The intention was that the opponent would not march alone that day as he had announced.

The same Sunday, live on the social networking site Facebook, Garcia said agents in plain clothes near his home fired several journalists. They tried to hide the facts.

The Cuban archipelago, the promoter of recent protests, acknowledged that the departure of one of its most important members, Garcia, was a “surprise”. He was considered a “victim” of the “repressive apparatus” of the Miguel Diaz-Connell regime.

“We learned through Europa Press that Junior Garcia and his wife, Dayana Brito, came to Spain.”, Posted the site on his Facebook account, where he also promised to share new data “as soon as he gets some first information”.

The organization announced that Jr. and his family were “missing”, public news on their social networks. The news website Cubadpad, the equivalent of a dictatorship, published an article at the Jose Marti International Airport in Havana that it considered a “show” with a portrait of the playwright.

Legal scholar Fernando Almeida, A member of the archipelago, promised in telephone statements Europa Press That they “absolutely know nothing” about Garcia’s exit.

“It took us by surprise,” Almeida said, adding that Garcia and his family “are fine.” Considered a playwright “Affected by this organization” He also recalled that in recent days he had felt the full weight of the “regime’s” repressive apparatus, which he had revealed on Sunday when he could not leave his home to march in the streets. Of Havana.

However he acknowledged that their numbers were not enough to defeat Cuban authorities. Because he had to “drive out the enemies”. In this sense, he promised that it would be a continuous trick to get rid of “uncomfortable” people like Garcia who are with the minor child.

See also  Hunchbacks, clawed toes and double eyelids: this is what humans will look like in the year 3000.

“We support and understand any decision”However, the judge made it clear that the archipelago would continue with its messages and mobilizations “no matter what”, despite the fact that Garcia was “a fundamental component” of the platform.

The opposition Prisoners’ Guard is also “waiting to understand what happened”., As mentioned on his Twitter account, and It was speculated that “forced eviction” was possible, Recalled that in 2019 UN reporters had already condemned more than 70 such exoduses from Cuba.

With information from EFE and Europa Press