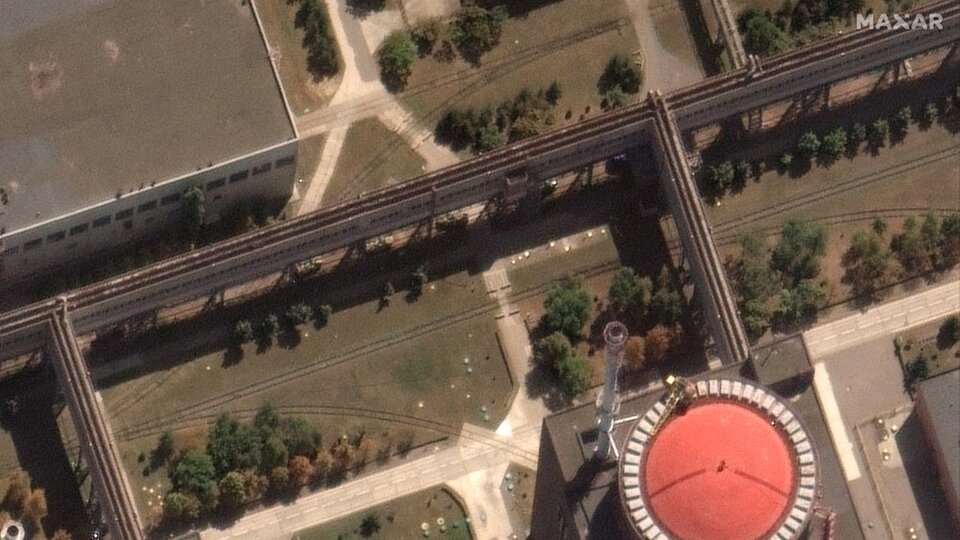 Polish Air Force planes will patrol Slovak airspace from this Thursday until the end of 2023, Warsaw announced today.

In an official statement, Pawel Soloch, head of the Polish National Defense Office, announced the start of the mission, which will be carried out on a rotational basis by two F-16 or two Mig-29 aircraft with a crew of ten. Players.

Under an agreement announced Saturday during a military air show at the Malaki base near Bratislava, Poland and the Czech Republic will support Slovakia by protecting its airspace until its armed forces receive 14 F-16S from the United States.

The deployment has similar objectives to that of the Baltic states, where a friendly military air group has been established to monitor Russian violations of NATO airspace and monitor the development of the war in Ukraine.

An IAEA spokesperson confirmed the arrival of the international team of inspectors.

“The IAEA mission has arrived at the Jaboria plant,” said Friedrich Dahl, who has traveled with a team to stabilize the situation at Europe’s largest plant, which has been subjected to attacks that could disrupt its operations.

According to the Interfax agency, a UN convoy of nine vehicles The convoy entered the vicinity of Europe’s largest nuclear power plant at around 2:15 pm (11:15 GMT).

A panel of 14 experts from the Vienna-based UN nuclear agency IAEA is tasked with assessing the situation in Zaporizhia, which was taken over by the Russian military six months ago.

Lavrov, against responding to the EU to restrict visas for Russians

Foreign Minister Sergei Lavrov confirmed today that the European Union (EU) is opposed to taking measures in response to restrictions on visas for Russian citizens agreed to.

Addressing the Moscow Institute of International Relations at the start of the academic year, the head of Russian diplomacy said, “We must not respond to stupidity with stupidity.”

He stressed that Russia does not need to isolate itself or “collectively punish the citizens of European countries.”

At the same time, Lavrov hinted that the principle of reciprocity would apply, but stressed that it “must be used against the instigators, organizers and implementers of these anti-Russian sanctions.”

At least three people were killed today in a Ukrainian artillery strike on Energodar, a town in southern Ukraine controlled by Russian troops that houses the Zaporizhia nuclear power plant, the pro-Russian interim administration condemned.

“Three civilians were killed and another was wounded,” an administration spokesman told Russian agency Interfax, adding that the city came under massive artillery fire by armed forces in the early hours of the morning.

In addition, Alexander Volka, the head of the city’s pro-Russian administration, announced that a Ukrainian division had landed on the outskirts of Enerkodar, located on the left bank of the Dnieper.

“Our aviation is working (…) I think soon everything will be over and we will win,” he told Volga, as quoted by Interfax.

Russia says the situation around the Zaporizhia plant is “under control”.

UN The Russian Defense Ministry said the situation around the Ukrainian nuclear power plant in Zaporizhzhya, where fresh fighting broke out on Thursday, was “under control” ahead of the arrival of the nuclear agency’s experts.

“The situation around the nuclear power plant is complicated, but it is under control,” the Russian military ministry said in a statement.

Pro-Russian officials from Energizaré, the town that hosts the nuclear power plant, confirmed that the IAEA mission entered Russian military-held territory in the Zaporizhia region and headed toward Energodar.

“According to the latest information, they will pass the Vasilievka checkpoint and in an hour they will be at Energodar,” pro-Russian mayor Alexander Volka said.

The International Committee of the Red Cross (ICRC) on Thursday called for an end to military operations around the Zaporizhia nuclear power plant in the southern region. Ukraine and occupied by Russian forces.

“It is time to stop playing with fire and take concrete steps to protect this facility and others from military operations,” ICRC Director General Robert Martini told reporters in Kyiv.

“The slightest miscalculation can unleash a catastrophe that we will regret for decades,” he added.

Russia accuses Ukraine of “sabotage” near the Zaporizhia power plant

The Russian military on Thursday accused Ukrainian troops of crossing the Dniepr River and retaking the nearby Zaporizhia nuclear power plant, where a mission by the International Atomic Energy Agency (IAEA) is due to go.

“At around 0600 hours (0300 GMT), two groups of saboteurs from the Ukrainian military, up to about 60 people, landed in seven boats (…) three kilometers northeast of the Zaporizhia nuclear power plant,” he said in a statement. . A statement from the Russian Defense Ministry said it had taken “measures to destroy the enemy”.

Ukrainian officials accused Russia of bombing the city of Enerkodar, home to the Zaporizhzhya nuclear power plant, which is due to visit this Thursday by a mission from the International Atomic Energy Agency (IAEA).

“The Russians are firing artillery on the route the IAEA mission is supposed to take to the Zaporizhia plant,” the Moscow-controlled city’s mayor, Dmytro Orlov, condemned in a telegram.

According to Orlov, the UN The regulator’s representatives could not “proceed on its way” to the plant for “security reasons”.

One of the six reactors at the Zaporizhia nuclear power plant, controlled by Russian forces in southern Ukraine, was shut down Thursday as a precaution due to Russian bombing, the plant’s Ukrainian operator said.

“Today at 4:57 a.m. (0157 GMT), due to another mortar shell attack by Russian occupying forces at the Zaporizhia nuclear power plant complex, emergency protection was activated and the power unit was shut down. Operation 5,” Energotum said in a statement. Report prior to the visit of the International Atomic Energy Agency mission to the site.

The director of the International Atomic Energy Agency (IAEA) said on Thursday that his work on Ukraine’s Zaporizhia nuclear power plant, which is occupied by Russian troops, continues despite military actions condemned by both sides.

“There was a military operation this morning and a few minutes ago,” but “we are not stopping, we are moving,” Argentine ambassador Rafael Grossi said from the city of Zaporizhia before heading to the plant, 120 kilometers away. .

In the morning, Russians and Ukrainians charged each other around the largest nuclear power plant in Europe, about two hours by car from the city of Zaporizhia and closest to the front lines.