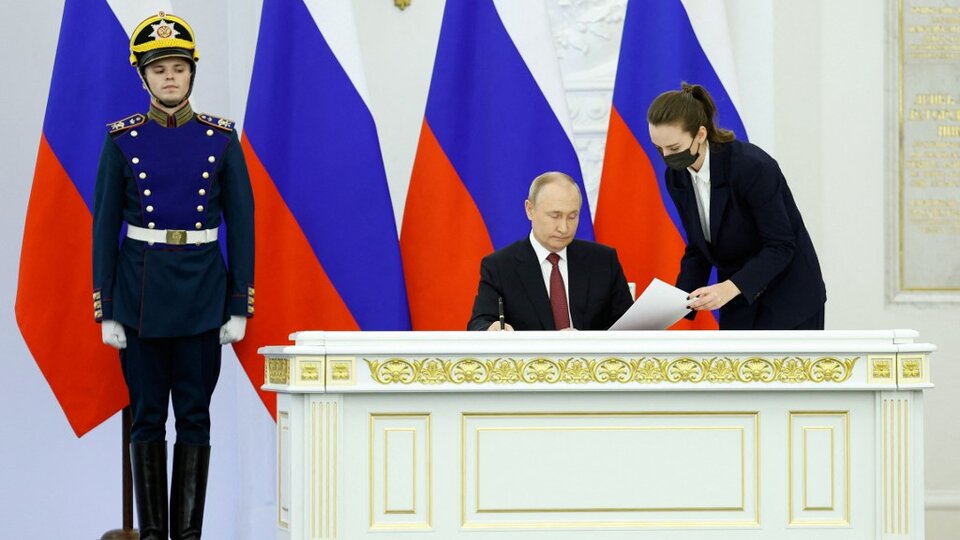 Russia expels the incumbents of Lithuania

In response to the same move by Vilnius, Russia today announced that Lithuanian official Virginija Ambrasien must leave the country within five days.

The Russian Foreign Ministry indicated that it called Ambrasin today to make the announcement.

Moscow protested the “unjustified” ouster of Sergei Ryabokhon, Russia’s charge d’affaires in Lithuania, and condemned the “unfriendly course” taken by Vilnius towards the “total collapse of bilateral relations, including humanitarian relations”.

That is why Russia will freeze the activities of the cultural center of the Lithuanian embassy in Moscow, the State Department explained.

Russian diplomacy reserves the right to take further measures, depending on Vilnius’ other hostile actions towards Umbrasiene.

Moscow said the Zaporizhia plant would operate under Russian leadership

Russia said on Wednesday that the Zaporizhia nuclear power plant, Europe’s largest and controlled by Russian forces, would operate under the leadership of relevant departments of the Russian Federation after annexation of the same province.

“The Zaporizhia nuclear power plant is now located on the territory of the Russian Federation, and as a result, it must operate under the leadership of our relevant departments,” Deputy Foreign Minister Sergey Vershinin said during a briefing at RIA Novosti.

Adviser to the General Director of Rosenergoatom, Renat Karchaa, who accompanied the mission of the International Atomic Energy Agency (IAEA) during a visit to the Zaporizhia plant, pointed out that Russia will be the owner of the entire nuclear complex.

“An operational system has been created. This system has established Rosenergoatom. The Russian Federation will be the owner of the complex in everything related to the nuclear power plant,” he said on public television channel Rossia-24.

Andriy Pavelko, president of the Ukrainian Football Federation, attended the announcement in the Swiss city of Nyon, with Spanish Luis Rubiales and Portuguese Fernando Gomes as headliners.

The two presidents of the Iberian confederations understand that “there is nothing better than the World Cup to send a strong message that will serve as a source of inspiration in the future”.

“I am sure that all the Spanish community will be proud of the important legacy that this nomination leaves in history. Each one of us individually represents our countries, but together we represent the power of transforming football in society,” Rubiales said. Press conference to present the plan.

Putin spoke of a Ukrainian counteroffensive and said the situation would “stabilize”.

Russian President Vladimir Putin today expressed his hope that the situation in the Ukrainian territories annexed by Russia will “stabilize” as a result of a Ukrainian counteroffensive in the east and south.

“We assume that the situation will stabilize in the territories annexed to Russia,” he said during a telematic meeting with Russian teachers.

Russia vowed on Wednesday to recapture areas within the Ukrainian territories annexed by Kyiv.

Russian presidential spokesman Dmitry Peskov told reporters that these “territories will be restored, and we will continue to consult on the (local) people’s desire to live in Russia.

A Kremlin spokesman was asked about the exact borders of the annexed areas, where Russian forces have abandoned some towns after Ukrainian counterattacks.

“These territories will remain with Russia forever and they will be recovered,” Peskov stressed.

Russia has resumed gas supplies to Italy after suspending them days ago due to a problem in Austria, where the gas pipeline passes, Russian company Gazprom announced today.

“Gazprom, together with Italian buyers, was able to find a solution after regulatory changes in Austria,” the company said in a statement.

Most of the Russian gas that reaches Italy goes through Ukraine, via the TAG gas pipeline, to Tarvisio in the north of the country, on the border with Austria.

Last Saturday, Gazprom explained in a statement that Russian gas transit through Austria had been suspended “due to the Austrian operator’s refusal to confirm transit authorizations.”

Russian strikes accompanied by Iranian “suicide” drones left one person injured and a fire in a Ukrainian city near the capital, Kyiv, officials said today.

Infrastructure in the town of Bila Cherkwa, about 100 kilometers south of the capital, was damaged by overnight attacks, the governor of Que province said.

Kuleba noted that there had been “six bombs and explosions” in the city of 200,000 people before the war.

“One person was injured. Many infrastructures were damaged,” he added on the Telegram messaging app.

See also  Russia completes military stand: it encircles Ukraine and may invade at any time

Ukraine Military developments this Wednesday in the Lugansk region (east), until now fully controlled by Russia.

“Now it’s official. The de-occupation of the Luhansk region has begun. Several cities have already been liberated from the Russian army,” the region’s Ukrainian governor, Serhii Keitai, said in a telegram.

The European Union (EU) has agreed to a new round of sanctions against Russia, after the country annexed four regions. UkraineThe Czech president of the bloc announced the post on Wednesday.

The Czech Republic’s ambassador to the EU said on Twitter that the new sanctions package was agreed at ambassadorial level and will go through a final approval process before being published and entered into force on Thursday.

“We have reached a political agreement on new economic sanctions against Russia – a strong EU response to Putin’s illegal annexation of territories,” Ambassador Edita Hurta said.

This is the EU’s eighth economic sanctions since the Russian invasion Ukraine On February 24.

Russian President Vladimir Putin on Wednesday signed a law on the unification of four Ukrainian regions and decrees formally appointing the leaders Moscow has already installed there.

The documents, signed by Putin, state that the regions of Donetsk, Lugansk, Zhershone and Zaporizhia are accepted “into the Russian Federation in accordance with the country’s constitution”.

Before Putin’s signature, the annexation law was unanimously supported by the lower and upper houses of the Russian parliament.