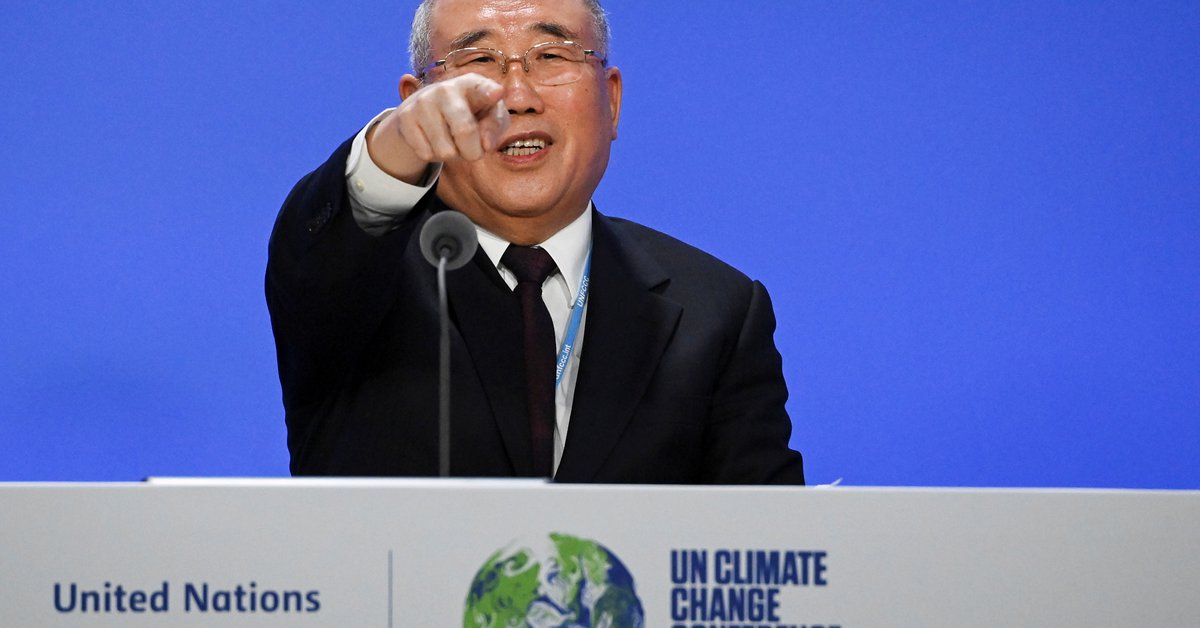 Chinese Special Envoy Xie Zhenhua, during a press conference, announced the joint declaration of cooperation between his country and the United States in the fight against climate change. Jeff J. Mitchell / Pool via REUTERS

Appeared from somewhere. This was an announcement at a regular press conference. It came as a big surprise Among the delegates, officials, environmental activists and journalists who attended the COP26 environmental conference in Glasgow. China and the United States jointly issued a statement Agreed to work together to intensify action in the fight against climate change this decade. The two most polluting powers on the planet vying for world leadership in the second half of this 21st century have agreed on one of the most important things, despite tense bilateral relations.

“In this COP26 the two countries have reached a number of climate issues and reached a consensus We acknowledge the need to fight methane and illegal deforestation“China’s special envoy for climate change, Xie Zhenhua, told a small group of reporters:” The two major economies in the world, We need to be proactive in tackling climate changeHe added.

The first review of the agreement of environmental organizations did not give any unusual data, however This is a gesture that signifies a better outcome than expected in the final document of the summit. It was this kind of bilateral agreement between the United States and China that led to the 2015 Paris Agreement. “The Importance of Geopolitics”Said Nick Mabe of the E3G Center for Environmental Studies. “This high-level commitment puts pressure on both countries to move their positions to make COP26 a success.”

John Kerry, the US special envoy for climate change, said the United States and China have two options: “We can move away from COP26 without working together and surprise the world about where the future is going … or, OK, we’re working here. We did it together.” REUTERS / Phil Noble

Powers reaffirmed the Paris Agreement’s temperature targets (average global increase of less than 2 degrees Celsius). “There is a gap between current policies to control emissions and what needs to be done.” Washington and Beijing will set up a task force to boost measures against global warming in this decade of 2020, which will have its first meeting in the first half of next year. And The success of COP26 was guaranteed to be driven, including agreements on climate finance and the rules for creating a global carbon market.. However, China has refused to sign the global pledge put forward by the United States and the European Union to reduce methane emissions by 30% from 2020 to 2030. “China will develop its own national plan.” Sources in the Chinese delegation told Bloomberg that their country would announce the details of its plan for methane in COP27 next year.

At another press conference immediately after Xie’s intervention, US Special Envoy for Climate Change John Kerry, He was “satisfied” with the deal Between the two countries. “We hope that the steps we are taking will answer questions about China’s speed, and help accelerate the efforts of this country, the United States and other countries,” the former foreign secretary said.

Kerry added that the United States and China have two options.We can move away from COP26 without working together and keep the world wondering where the future is going to be., Clearly with a gap. Or, we can get out of here by working together to increase our ambition on cuts and start moving in the right direction. That was the choice we really had, and this is the end. Thus said the Special Envoy President Joe Biden and Chinese President Xi Jinping are set to host a virtual summit soon Your team is preparing for that event. Kerry said he first spoke with Chinese climate ambassador Xi Jinhua in February after Biden took office and that talks had continued this month. Until now, these diplomatic contacts were unknown.

A few hours before this announcement, the COP26 Presidency traditionally issued, Draft agreement for the summit, It may change in the next few hours depending on whether negotiations progress or not. Add a paragraph to that The world should aim to control global warming to 1.5 degrees Celsius And it recognizes the role of fossil fuels in the climate crisis, which, while it may seem a fact, was the primary one at the annual summit. Countries such as Saudi Arabia and other major oil producers have always refused to include that statement.

Xie did not directly answer the question of whether China would support the COP26 draft agreement in its entirety, although he had previously stated that his country was adhering to the goal of the Paris Agreement of “2 degrees of global warming and preferably 1.5 degrees”. . Chinese officials have been saying it over and over again Does not support any change in the goals of the Paris Agreement With an increase in temperature. But At the summit, China did not sign a pledge to phase out coal use by the end of this decade.. The United States and India have refused to sign. These countries are the three largest emitters in the world and the largest consumers of coal.

Currently before 2030, when asked by Kerry if China will push forward a date to reach maximum greenhouse gas emissions, he said. U.S. officials believe China may have already reached its maximum emissions And that these are enduring. “President Shi has set a deadline for when he thinks he can reach the summit, and we talked a lot about the summit,” Kerry said. “What we wanted was that when China started that process, it agreed in its announced plan that we could try to reduce emissions and China agreed that they would do what they could. Speed ​​up the taper work”.

A surprise and novelty. The tense relationship between the US and China has so far hampered the success of global climate talks. Both countries limited the scope of the 1997 Kyoto Protocol. China does not need to join as a developing country, and the United States has refused to sign unless the Beijing government signs it. Now they gave another signal from Glasgow.

We are heading towards a catastrophe of 2.4 degrees Celsius with the global average temperature
COP26: Shocking video of a minister condemning the disappearance of his country due to climate change
COP26 wants to say goodbye to coal