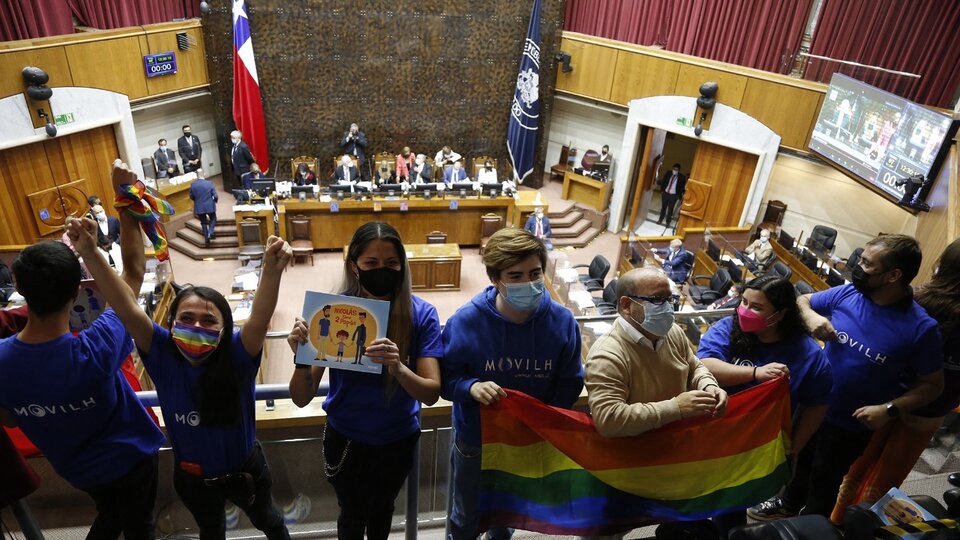 Of Congress Chile approved the same-sex marriage law on Tuesday, An initiative that began working four years ago and will eventually manage to equip the rights and obligations of people to marry and adopt.

The bill was considered in the lower house this afternoon, where it was received 82 votes in favor, 20 votes against, 2 abstentions. A few hours ago, he received the approval of the upper house, with 21 senators in favor, 8 against, and 3 abstentions.

Rule Allows same-sex couples to marry, adopt children, and raise parents, One of the key points of the debate, was that from 2015 until today homosexuals had only the legal form of the Civil Union Agreement (AUC), which did not recognize philanthropic rights.

Chile thus becomes It is the eighth country in Latin America to legalize same-sex marriage After Argentina, Brazil, Colombia, Uruguay, Ecuador, Costa Rica and many other states in Mexico.

The Equal Marriage Plan was presented in 2017 at the instigation of former Socialist President Michael Bachelet (2014-2018). However, it stagnated for almost four years.

In a surprising turn, the current right-wing president Sebastian Pinera said last July that “the time has come” to approve the initiative and instructed parliament to discuss it urgently..

The announcement came as a surprise to the most conservative sections of the right, who voted against it last week and extended the debate for another seven days.

The merger, which emerged last week between congressional councils and differences over issues related to the renewal of labor rights and gender identity legislation, forced the creation of a mixed commission, which forced a new vote in both houses on Monday..

The marriage was approved by the country’s LGTBI bodies, which have been pushing for parliamentary action for several weeks.

To celebrate, this afternoon they called for a rally at Central Plaza Italia in Santiago. “I was so emotional. It cost me so little to keep my peace. It was a multi-kilometer race,” said Isabel Amore, director of the Iguales Foundation, who followed the vote from the congressional stand.

“With the consent of the same marriage, Chile has taken a historic and decisive step towards promoting and integrating the human rights of gay couples and gay families., All of which, without distinction, are discriminated against and violated from the very beginning of our country, ”the Homosexual Integration and Liberation Movement (Movilh) highlighted in one communication that it has been promoting equal marriage for many years in Chile.