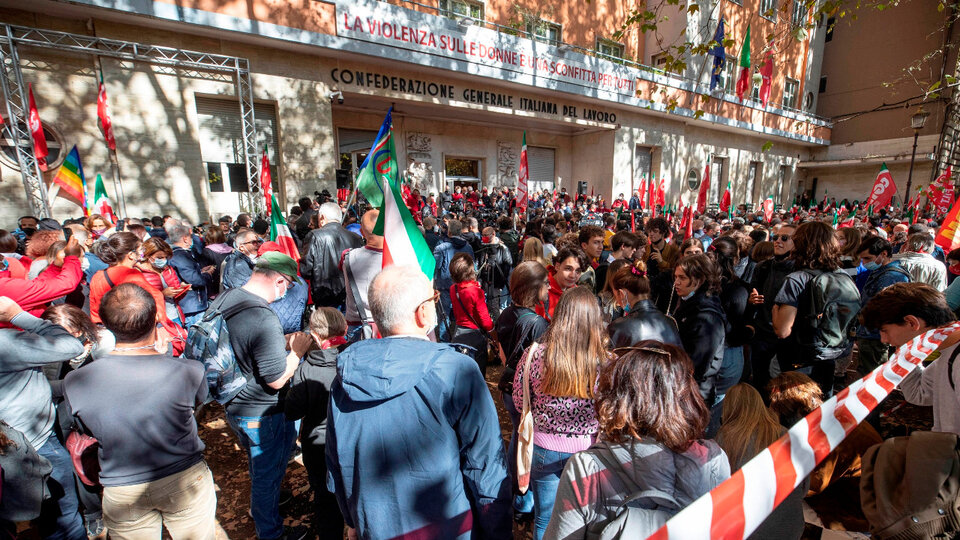 After the aggression demonstrations Green Pass protests last Saturday in Rome, Milan and other cities in ItalyPolice arrested 12 people on Sunday, including in the Italian capital (another in Milan and 57 reported). Two leaders of the far-right Forza Nua Considered relevant and / or responsible for the organization of this march Flew “correspondence bombs”(Basic explosion), stones and other objects against police and public buildings.

In Rome, protesters besiege the headquarters of the Italian Federation of Labor (CGIL, left), One of the three major trade union centers in Italy.

In principle, a demonstration was organized in Piazza Navona, Italy, without police approval, in protest of the Green Pass (driving license, legal obligation obtained after the second dose, even in Europe and other countries. Govt vaccine) and it Entry into workplaces will be mandatory in Italy from October 15, Public or private. Some protesters then marched on CGIL headquarters in Corzo di Italia, not far from Verneto. There they forced their way in, destroying glass, doors, walls, and furniture. The attack of the protesters, most of them from No Vex (anti-Govt vaccine) and from the right, is similar to the catastrophe caused by the defenders of former President Donald Trump. At the Washington Capitol last January. But of course, many small dimensions.

In Rome, another section of the population headed for the Zia Palace, the seat of government via del Corso, and A few meters from the Chamber of Representatives building. The protesters dispersed after a few hours of unrest and protests and police intervention led to the burning of tear gas (one of the rarest in Italy) and hydrant trucks.

But the attacks did not end there. At night another group of new fascists attacked the guard of the Umberto Primo Hospital in Rome, Maybe release one of the detainees who was admitted to the hospital because he was injured. They broke a guard’s gate and attacked a nurse with a bottle. But they failed to remove the injured person.

In fact, the idea of ​​this aggressive march was to provoke panic and manipulate the No Green Pass in favor of the right. But some wonder if this act, which has set some precedents in Italy in recent years, has not been able to exert influence. Candidates’ election – hurting the right – should be done by the people on October 17 and 18, During the second round of municipal elections in several Italian cities, including Rome and Turin (north).

At least two of those arrested in Rome on Saturday and Sunday were leaders Forza Nouvova, Roberto Fior and Giuliano Castellino, but Piaggio Pasano, the leader of the “Io Apro” organization (I open), opposed the closure of the Ministry of Health’s order in the most serious months of the epidemic. Luigi Aronica, a former member of NAR (Núcleos Armados Revolucionario), a neo-fascist terrorist organization that emerged in the 1970s.

About 38 representatives of the police and security forces were injured. Police were able to identify 600 participants in the march.

“Bella Xiao”, the unity of the people and politicians

Prime Minister Mario Durkahi has issued a statement condemning Saturday’s violence in several Italian cities. “The right to express one’s opinions can never be degraded into acts of aggression and intimidation,” Drake stressed.

Sunday Many marches and solidarity activities were organized with the CGIL. in various cities of the country. Left-wing militants and CGIL members also gathered at the door of the organization with red flags During World War II he sang a song referring to the anti-fascist movement: “Bella Xiao.”

The current head of the CGIL, Maurizio Landini, called on Italians to eliminate job insecurity in the country. “There is a malaise in our country that needs to be addressed. It is time to make decisions. The use of the constitution is to dissolve some organizations,” he told the groups that organized the attacks on Saturday. But above all, according to Landini, social unrest must be resolved by working at the center of concerns.

“The full condemnation” of what happened on Saturday was “the leader of Forza Italia (Silvio Berlusconi, center-right) called on London to express his solidarity. It mixes before making it clear that there is no connection to these acts of violence Neo-fascist violence with others must be carefully analyzed.

Enrico Letta, a Democrat (center-left) extremist, visited the CGIL headquarters in Rome on Sunday to express his solidarity. “We must not reduce our security, and we must be clear about the dissolution of Forza Nua. We will present a motion in Congress. Our constitution is very clear on this matter. Forza Nuova should be used. The worst thing is that you have to be very careful about the next demonstrations and take effective precautionary measures. The Italian constitution, born after World War II, states, among other things, that fascist parties cannot be reorganized.

“We cannot accept that there is such violence in our country,” said Giuseppe Conte, the current leader of the Five Star Movement, when he left the CGIL to express his solidarity. .