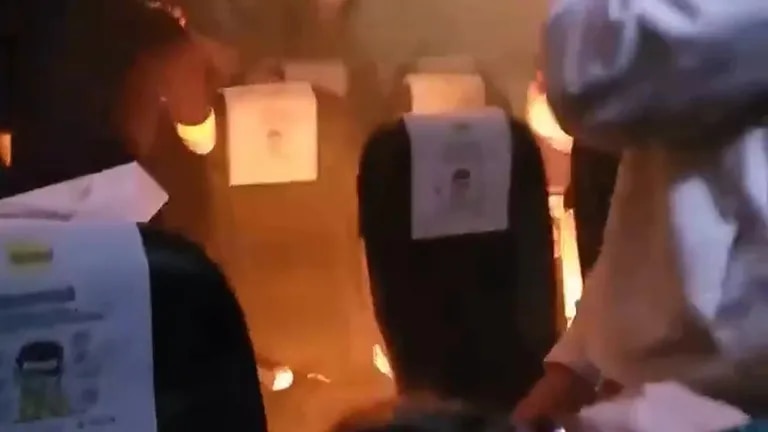 Two passengers were injured A portable charger has exploded and caused a fire on a plane in Taiwan. The incident took place on a Scoot flight that was flying from Taipei to Singapore at 7:30 am (local time) last Tuesday.

However, a recording of the accident was released on Wednesday. According to media reports C.N.AContacting the airline in question, he said the flight was preparing to take off in the direction of Taiwan Airport when the staff alerted them to the accident.

As pictures posted on social media show, the huge fireball on the rows of seats caused panic among the passengers. Angie Dunn, 28, who was on the plane, described what happened.

“I was sitting in economy class when the engine started running I heard people’s voices saying ‘Ooh’ and ‘Aah’. I also saw scared faces. Turning around, I saw three rows of large, bright orange flames behind me.”

Immediately, “People started backing up, saying, ‘Help, help! There’s fire.'”Ms. Dunn explained. It was there that one of Scoot’s flight attendants told the passengers to get away from the fire and calm down. A few seconds later, the fire was extinguished with the help of a fire extinguisher.

As a result of the fire, the cabin filled with smoke and fans had to be turned on to clear the air. “I want to congratulate the flight attendants because they know what to do. They deserve recognition for their training, hard work and calm demeanor.”, closed the passenger.

After the crash, the plane was parked on the runway for three hours before returning to the boarding gate. According to Scoot, the owner of the portable charger and his partner They suffered “minor burns on the fingers” and were given medical treatment.

Additionally, An elderly woman on board – who was crying when the flames erupted – was treated by local medics for injuries sustained during the stampede. This caused some travelers to want to move away from the volcanic source.

The incident did not affect the take-off and landing operations of other flights. Scoot apologizes for what happened. The safety of our customers and employees is our priority,” the airline said, adding that investigations are ongoing.